The Erzberg is at the Northern fringes of the Eastern greywacke zone, a band of Paleozoic metamorphosed sedimentary rocks that forms an east-west band through the Austrian Alps. This zone was rich in copper ore and iron ore and, thus, it attracted many people to settle there. There is clear evidence that copper ore had already been mined at the surrounding mountains of Eisenerz in the Bronze Age. In the Catholic church of Eisenerz (Oswaldikirche), there existed a written document that mentions the date 712AD as the starting point of mining at the Erzberg. This document, which was lost unfortunately, was the oldest written news of Eisenerz and the Erzberg. In Steyr people supposedly found documents too confirming this dubious date.

The first mining activities at the Erzberg were on the surface of the mountain. People made very small pits to dig out the precious mineral limonite (brown ore), which was found close to the surface. This primitive form of open-pit mining can be dated back to the 12th century. At that time miners got mineral rights from their territorial rulers.

In the 16th century people started underground mining due to orders of the Austrian emperor, since surficial ore bodies were slowly depleting. The first underground tunnels were only 8 to 10 meters high. In there, the miners followed the ore veins in utter darkness. At that period the Erzberg was divided into two parts. The upper part was mined by the townsfolk of Vordernberg. The lower part was mined by the people of Innerberg (former name of Eisenerz). 1,186 meters above sea level was the dividing line. This division led to the building of the two municipalities Vordernberg and, finally, Eisenerz. The ore of the part of Vordernberg was shipped to Leoben, the ore of Innerberg was shipped to Steyr. 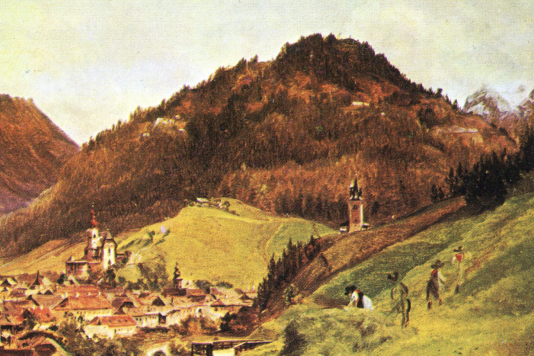 For underground mining primitive tools, such as hammer and pick, were used. The miners managed to dig into the mountain only a few centimeters per day (roughly 10 to 12 hours). This changed with the use of black powder, the earliest known chemical explosive, in 1720. In 1870 the miners started to use dynamite, a revolutionary invention not only for mining operations. Six years later electrical cables (or fuses) were used to connect to the blasting cap. The boreholes had to be drilled manually until the beginning of the 20th century. From 1906 onwards, the first primitive percussion drills were used. They were powered by compressed air which had to be transported into the underground tunnels via pipelines. Since 1970 automotive hydraulic drill rigs have been used exclusively.

In the depths of the mountain darkness was always a constant companion of the miners. Up to the 19th century, the eternal night was fought by candles. Unfortunately, a miner only got two candles per shift. The beginning of the 19th century saw the rise of oil lamps in underground mines at the Erzberg. At the beginning of the 20th century those oil lamps were replaced by the much brighter carbide lamps which produce and burn acetylene. Acetylene is created by the reaction of calcium carbide with water. The carbide lamps were the dominating light sources until the second half of the 20th century. Today you will not find any carbide lamps in the mines of Central Europe, as they were replaced by flashlights.

In the Middle Ages the limonite was smelted in small forges near the pits. The position of these forges was crucial, as the power of natural winds was needed for smelting the ore. The lower part of the forges was blotched by narrow openings to let the air stream through steadily. At that time the miners had a subsistence economy, in which people produced food, clothes, etc. for their own use only. 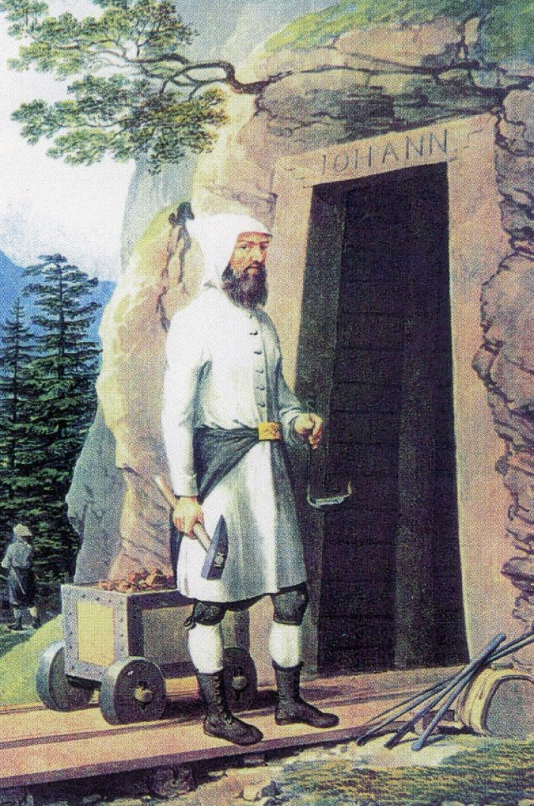 New technological inventions started to change the environment of the miners. The power of water through the aid of water wheels was used to generate wind in bellows for smelting ore. Therefore, the forges were built at the creeks in the valley of Eisenerz and Vordernberg. Those early furnaces were called “Radwerk”. Near the “Radwerke” many people started to settle. In the early 16th century 19 Radwerke were built in Eisenerz. These were led by the so-called “Radmeister” (master of the Radwerk, who employed more than 100 people, from miners, wagoners, wood cutters, charcoal burners, which burned wood to get charcoal, and the workers and helpers in the forges. The process of turning ore into iron was a tough and exhausting one. After mining the ore, people had to carry the heavy material down into the valley to the Radwerke. They used a kind of sleigh for that. On the slay there was a burlap bag where the ore was put. Because of this bag, the sleigh was called “Sackzug”. Frequently, the wives of the carriers helped bringing the sleigh to the pits, so that the carriers could rest a bit. Interestingly enough, in Vordernberg no sleighs were used, but horses. Only in the late 16th century the first miners’ carts were used for transportation.

From 1810 to 1870 the first haulage system of underground shafts and tunnels was created. For the first time it was possible to transport the ore by using one main transport route. At the Erzberg the ore was transported by miners’ carts, horse and cart was used to take the ore to the Radwerke down in the valley. 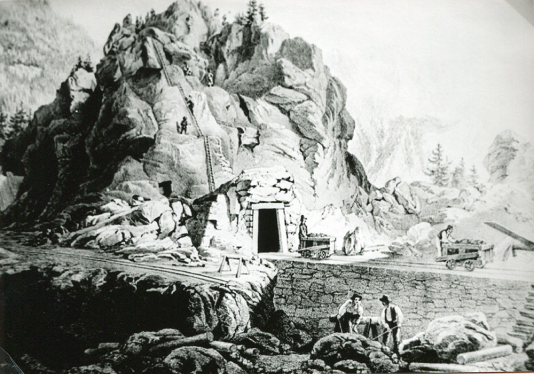 In 1810 the first railwaytracks were laid, and within 21 years a railroad network connected almost every part of the Erzberg. Together with the underground shafts and tunnels, ore transportation down the mountain was rationalized.

Due to continuous ore extraction, railway routes had to be changed quite often at the Erzberg. Furthermore, ore production increased enormously in the 20th century. As a result, the first dumpers were bought in 1951, and in 1963 these dumpers replaced the miners’ carts completely. All the railway tracks were removed. Still trains were used to take the ore from the mountain to the blast furnaces, which were built in the valleys of Eisenerz and Vordernberg. The miners also used these trains to go to their workplace. After the construction of the new loading station in the valley, which is close to the ore processing plant, trains became obsolete at the Erzberg. Still, the ore is shipped from this loading station to Linz and Donawitz by trains. 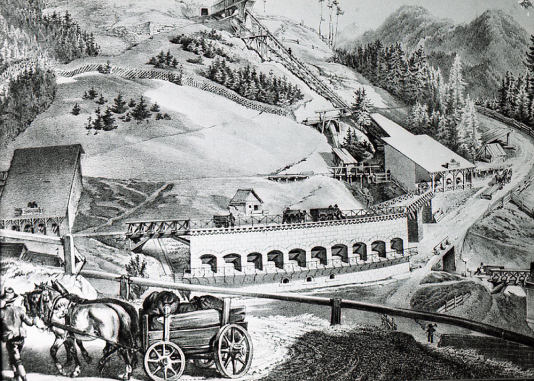 Due to innovations in technology and the resulting boom, many miners lost their job at the Erzberg. For the remaining workers, a funicular railway, the “Hugo-Stinnes Aufzug”, was built to get them to their work place fast, and before World War I, simple wooden huts were built at the Erzberg, where the miners could live. The largest settlement at the Erzberg was called Wismath, which was 1,270 meters above sea level. This settlement had a police station, pubs, and a small market. The 20th centuryalso  saw the introduction of steam excavators, modern crushers andsorting plants, wheremostly women separated the ore and the waste per hand. 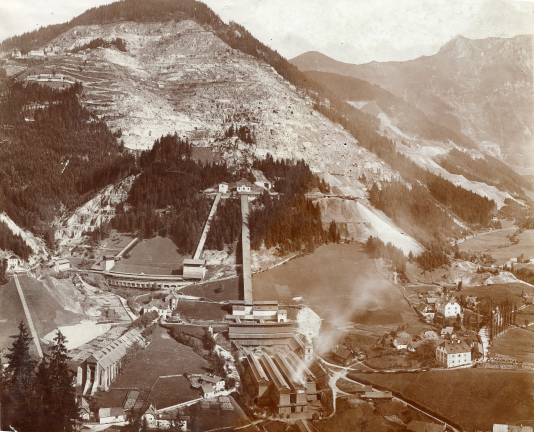 In 1890, people started to do open-pit mining in bench- form at the Styrian Erzberg. That is the reason why the Erzberg looks like a pyramid today. In 1907 the iron mountain had 60 benches with an average height of 12 meters. In 1928 the height of the benches was doubled (24 meters), thereby reducing the amount of benches. These mining benches were named after saints or important miners. The biggest pyramid of the world – the Erzberg, which is 1,465 meters high – is a magnet for thousands of visitors throughout the entire planet. The mountain has a mystic power nobody can defy. 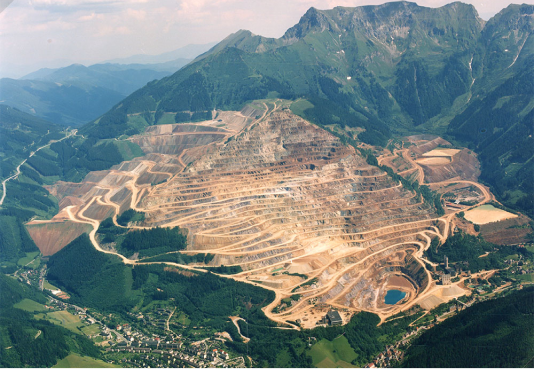 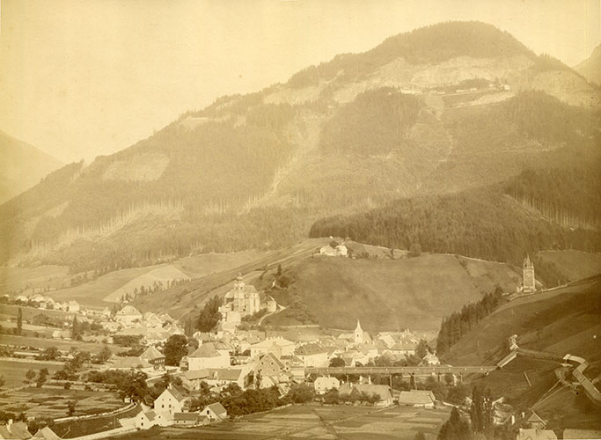 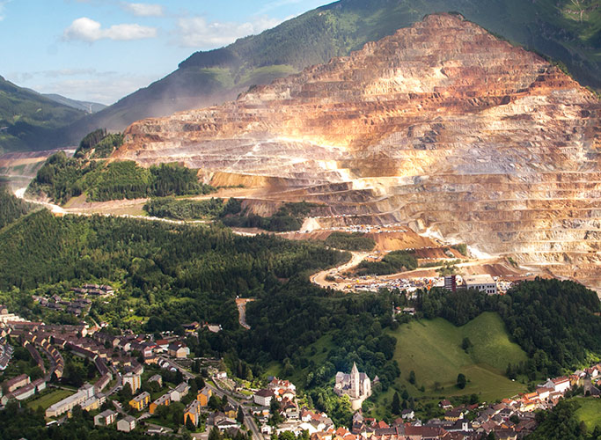